Made with a budget of $170 million, Robert Rodriguez Alita: Battle Angel brought out the pessimist in box office prognosticators in recent weeks. Even though the film got a mostly positive early reception, there were many in Hollywood who were ready to write it off as a flop. It turns out that they were a bit off the mark, however, as while the movie’s opening weekend numbers aren’t exactly “impressive,” the film definitely overperformed compared to expectations to take the number one spot away from Mike Mitchell’s The LEGO Movie 2: The Second Part. Check out the full Top 10 below, and join me after for analysis! 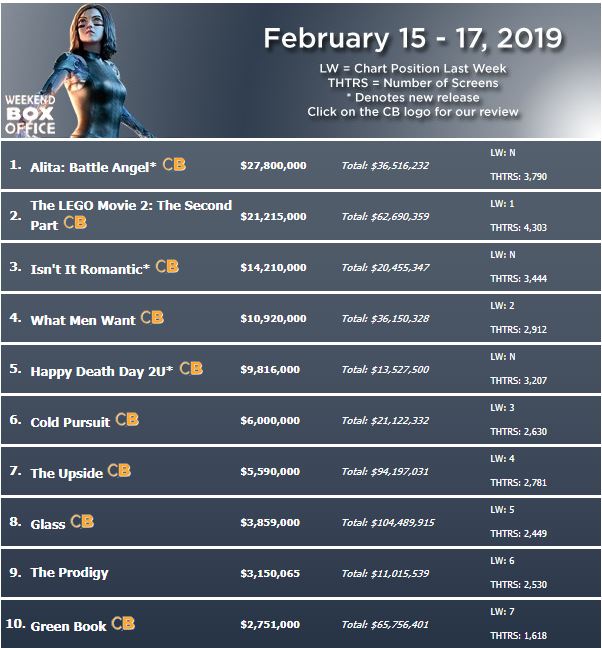 Predictions suggested that Alita: Battle Angel might not top $25 million across its extended opening weekend – having been released on Wednesday night instead of Friday – but audiences demonstrated a lot more interest than that. The movie managed to not only top $25 million in the three day weekend alone, but it’s domestic total now stands at $36 million. Again, this isn’t exactly record-breaking, but few saw the ticket sales coming.

It’s also important to note that the film is also continuing to do very well overseas – and while it won’t be arriving in China until later this month, it has already made some serious cash abroad. We reported last Monday that Alita: Battle Angel had made $32 million during a fast start in foreign markets, and in the time since that number has nearly tripled. Thanks to those contributions, the global total for the manga adaptation has gone over the century mark and currently stands at $130.9 million. It still has a long way to go before it can be considered profitable, but right now it’s not a goal that will be totally impossible to reach. The next really huge global release will be Anna Boden and Ryan Fleck’s Captain Marvel, and that won’t be hitting cinemas until early March.

For what it’s worth, Alita: Battle Angel also seems to be getting a positive response from audiences – though the statistics suggesting this aren’t super scientific. Cinemascore surveys were apparently not distributed at screenings, but it does at the very least hold a 93% audience score on Rotten Tomatoes, and a 7.6 on IMDb. Will that lead to folks buying tickets to see it again, or influential watercooler chatter? It’s hard to say right now, and the full picture won’t be clear until this time next week.

It’s nice that Alita: Battle Angel did better than expected, but also important to note that this was overall a pretty dismal weekend for Hollywood (to say the least, 2019 is not off to a tremendous start). According to Box Office Mojo, the collective performances of all titles currently in theaters – both new and old – resulted in the worst President’s Day Weekend since 2004 (which had Peter Segal’s 50 First Datesas the big draw). In recent years we have seen mid-February become a stronger and stronger release window, with massive hits like Tim Miller’s Deadpool and Ryan Coogler’s Black Panther absolutely crushing in their debuts, but we saw none of that heat active in 2019.

Counterbalancing the action of Alita: Battle Angel, it appeared like Todd Strauss-Schulson’s Isn’t It Romantic was being set up to try and get the date movie crowd, but it turned out to not have a great deal of appeal and couldn’t beat out The LEGO Movie 2: The Second Part in week number two. The box office stakes aren’t exactly as a high as they are for the Robert Rodriguez-James Cameron collaboration, as it surely cost a small fraction of the visual effects-heavy project, but one could also imagine that there was hope that the film would do better than a little over $20 million across a five-day holiday weekend.

Of course, things could be worse, as illustrated by Christopher Landon’s Happy Death Day 2U – which, editorially speaking, is a real bummer. The first Happy Death Day was a big hit when it came out, making a global total of $125.5 million against a $4.8 million budget in October 2017, but it looks like Universal Pictures and Blumhouse made a big mistake changing up the release season for the follow-up. On top of that, given the time loop narrative one might think that it would have done a lot better if its release had been timed to Groundhog Day, which would have meant that its only real competition would have been Catherine Hardwicke’s Miss Bala (which has been a box office dud and opened behind M. Night Shyamalan’s Glass in its fourth weekend).

Estimates said that the sequel would make as much as $25 million during the holiday, but the final results were closer to half that. The movie has already made its $9 million budget back, and has a worldwide total of $25.3 million so far, but this is a disappointment when you think about what could have been (and the fact that it’s actually a really fun film that deserves to be completed with a trilogy capper).

On the superhero beat, it’s also noteworthy that two titles that have been lingering for weeks are now off of the Top 10. Both Peter Ramsey, Bob Persichetti, and Rodney Rothman’s Spider-Man: Into The Spider-Verse and James Wan’s Aquaman managed to maintain solid placement on the chart since coming out in mid-December 2018, but the slate of new releases bumped them down to eleventh and twelfth, respectively. Combined they have made $514,092,006 domestically, and that’s a remarkable feat worth celebrating, and honestly kind of a nice spit in the face to anyone prognosticating the death of the comic book movie.

Coming up we have a pretty quiet weekend, with the only new wide release being Dean DeBlois’ How To Train Your Dragon: The Hidden World – the film that will end the trilogy that began nearly a full decade ago. How will it fare against the features that are already doing a nice job beating each other up? We’ll find out when the dust clears seven days from now, so join me again then!