The International Union of Cinemas (UNIC), the body representing European cinema trade associations and operators, has today released its provisional update on admissions and box office revenues across Europe for 2019. 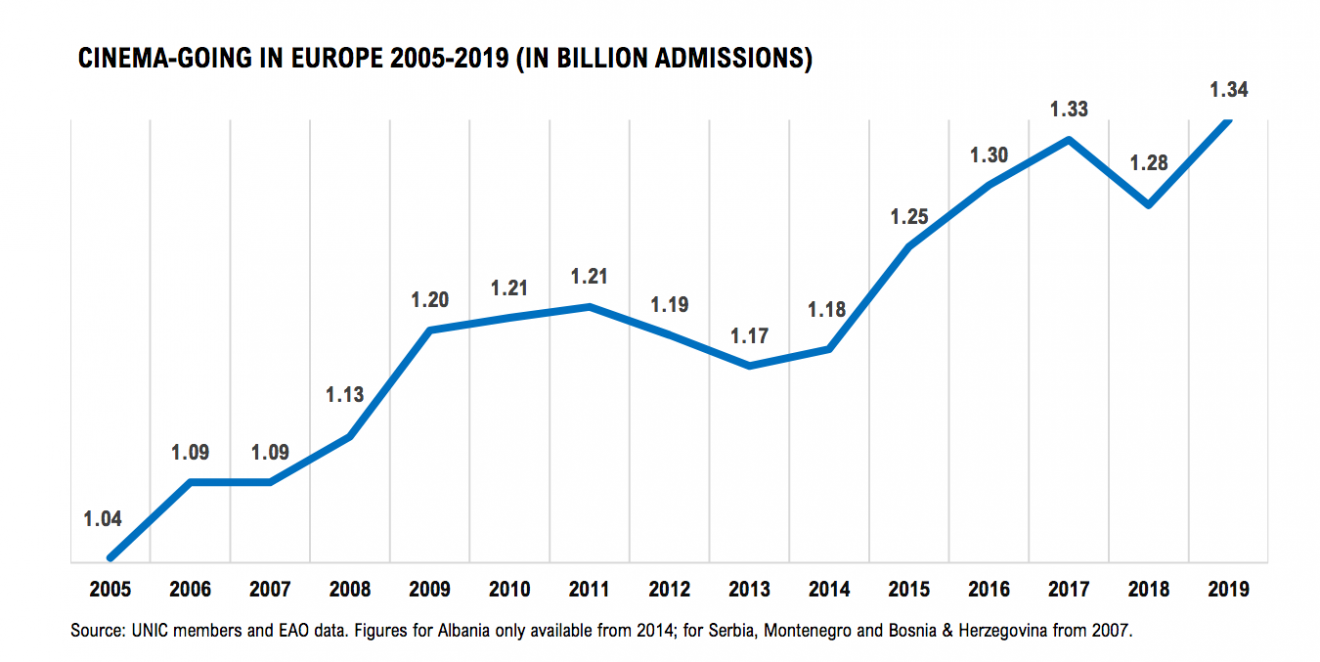 RECORD-BREAKING YEAR FOR CINEMAS ACROSS EUROPE

European cinema admissions increased by 4.5 per cent in 2019, with over 1.34 billion visits across the region –a record-breaking feat unmatched since the early 1990s. In the European Union, cinemas recorded their best results for 15 years, with admissions reaching the 1 billion mark for the first time since 2004. These exceptional figures serve to highlight the continued strength and adaptation of the sector

Once final box office figures for all UNIC territories are available, precise total box office revenues and the percentage increase compared to 2018 will be shared.

As has been the case in the past, the box office was mainly driven by international titles including, but not limited to, The Lion King, Avengers: Endgame, Joker, Frozen 2 and Toy Story 4. Nevertheless, a host of local titles attracted huge interest across Europe, including, but not limited to, Qu’est-ce qu’on a encore fait auBon Dieu? (FR), Das perfekte Geheimnis (DE), Jagtsæson (DK), Tõde jaõigus (EE) and Ženy v běhu( CZ).

Superb performances in Russia, France and the UK

Russian cinemas attracted a record 216.3 million visitors in 2019, the third consecutive year when admissions reached over 200 million, a figure that has doubled since 2007. Russia managed once again, as in2017, to become the leading territory in terms of cinema admissions in Europe, just in front of France, which recorded an astonishing 213.3 million visits to the cinema its second best performance since 1966.The UK, the third biggest European cinema market in terms of admissions, grossed over £1.25 billion at the box office–equating to a European-high €1.48 billion-following a record-breaking 2018.

Renewed optimism in Germany and across Western Europe

Following a difficult 2018, admissions in Germany grew by 12.6per cent, as cinema operators worked hard to bring audiences back to the Big Screen. A similar trend could be observed in neighbouring Austria and Switzerland, while most Western European territories experienced positive results last year. The Netherlands is also worth highlighting, as the local industry has been growing at a steady pace over the past decades to reach a record 38 million admissions in 2019.

Growth in Spain, Portugal and Italy

The Spanish cinema industry enjoyed its best performance since 2009. Surpassing the symbolic 100 million mark, Spanish exhibitors managed to increase admissions by 37 per cent compared to 2013, when an ill-advised increase in VAT on cinema tickets hit the local industry. Following a challenging 2018, the Portuguese industry enjoyed a year of growth (box office +5.6 per cent / admissions +5.0 per cent) and surpassed the 15 million admissions mark for the second time since 2011. Similarly, with the return of major summer releases, admissions in Italy are expected to exceed 100 million visits, while box office grew by an impressive 14.4 per cent.

The success of the cinema industry across the Baltics is worth highlighting, as Estonia and Latvia attracted record admissions while Lithuania achieved its second-best performance ever, following an incredible 2018. Furthermore, all three territories had a local title leading at the box office. Similarly, the cinema industry in the Balkans is growing at an increasing pace, with Bosnia and Herzegovina, Montenegro, Serbia and Croatia all enjoying their highest levels of cinema admissions ever, while Slovenia recorded its best results since 2012. More incredibly, Albaniansflocked to recently-opened cinemas in 2019, with a massive 69.9 per cent increase in admissions, also carried by the incredibly successful local production2 Gisht Mjaltë. Meanwhile, cinema admissions in Turkey decreased significantly in 2019 due to local industry disagreements. Increased average ticket price resulted in an increased box office, though currency conversion rates indicate a decrease of box office returns in euro.

Admissions per capita for all UNIC territories (where data was available) remained stable at 1.5 average visits per year. Ireland and France (at 3.3and 3.2respectively) again experienced the highest rates of cinema-going, followed by Estonia (2.8), the UK (2.7), Denmark and Spain (both at 2.3).